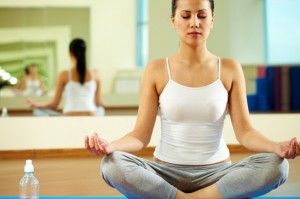 Yoga is often seen as a form of exercise for meditation and relaxation, but it does much more than that. It works out the body, strengthens the muscles and bones lengthens the spine and helps keep you in a generally healthy state. But did you know that yoga also has a positive effect for breast cancer patients and survivors?

Yoga for breast cancer has just slowly been receiving attention, but a new study shows that the practice can help women who are battling with breast cancer – both mentally and physically.

A new study done on yoga for breast cancer patients saw a few women hit the mat for an hour at a time, thrice a week for six weeks, and this produced pretty good results: those women who did yoga and stretching reported a reduction in fatigue. However, those women who actually learned yoga reported greater benefits to their general overall health, and reported feeling more positive to how they faced their cancers.

Regular yoga practice also caused a decline in the stress hormone cortisol, which is linked to negative outcomes when it comes to breast cancer.

Is it the mind-body connection?

In this day and age, and with the findings of studies connecting yoga for breast cancer, doctors are now slowly realizing the connection between the mind and the body. Today, medical practitioners acknowledge that the combination of both mind and body practices have been helpful for many patients in helping them with their physical and mental wellbeing, and thereby helping them in their fight against the big C.

What about breast cancer survivors

Just as yoga is good for everybody, it isn’t just for breast cancer patients, but for survivors as well. Many breast cancer survivors report that – even after declared 100% cancer-free, the cancer never seems to leave them. Thoughts of cancer going back or coming out from remission can plague them and cause emotional distress. In some women, these negative emotions can still come in even after being given a clean bill of health two years prior.

The meditation and mindfulness aspect of yoga can actually help people process these difficult emotions in a healthy way.  Yoga for breast cancer survivors is not only beneficial not just for one’s psychological wellbeing but even one’s physical wellbeing too.